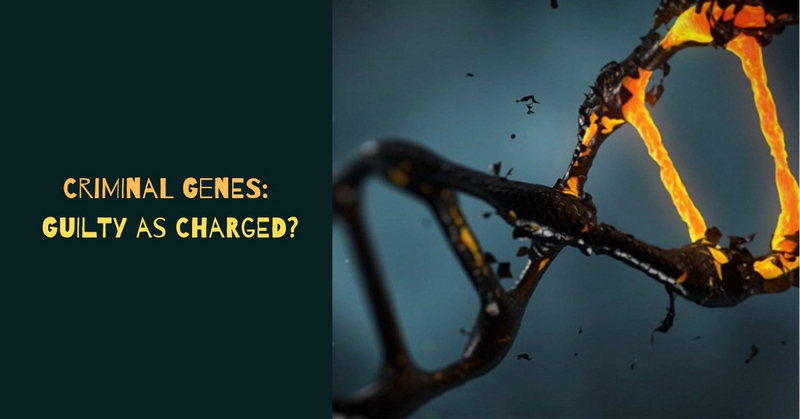 Swedish scientists claim that some people may be born with genes that make them extremely cruel. According to the new study, the extremely aggressive behavior of criminals is determined by genetics.

Serial killers and other criminals who have repeatedly committed serious crimes (robbery, grievous bodily harm) may have been “programmed” to cripple others. A study published in the scientific journal “Molecular Psychiatry” sheds light on why most of the violent crimes are usually committed by the same person (“maniac”, “serial killer”) or a very small group of offenders, and most often men.

For the first time, neuroscientists set themselves a goal – to study the genetic “baggage” of those people who demonstrate extreme cruelty over and over again.

“We found two genes that are mainly responsible for aggressive behavior,” said Jari Tiihonen, head of research, a professor at the Department of Clinical Neurobiology at the Karolinska Institute (Sweden). “Besides, there are probably dozens or hundreds of other genes, but their influence is not so pronounced.”

Tiihonen and his colleagues selected 1004 prisoners in Finland to participate in the experiment. 184 people refused to participate, and 26 were excluded due to the diagnosis of “psychosis.” The rest agreed to provide blood samples. It turned out that all samples contain one or both versions of the CDH13 gene and the so-called “warrior gene” – MAOA.

“If the natural production of dopamine in the body is reduced, its content in the brain can increase significantly after taking alcohol, cocaine or amphetamines,” Tiihonen explains. “These substances may provoke a dopamine explosion and aggression.”
The CDH13 gene is responsible for the development of connections between neurons in the brain. This gene plays a key role in the development of attention deficit hyperactivity syndrome.

Those who possess both versions of these genes are 13 times more likely to commit particularly serious crimes, unlike those who do not have them. If you add alcohol and other chemicals to the genes, you will get the “perfect recipe” for the disaster.

The study also helps explain why most serial killers are men. The “warrior gene” of the MAOA is located on the X chromosome – men have one copy, and women have two copies since they have two X chromosomes, Tiihonen explains. “Therefore, if one copy of a gene in a woman’s body is more active than another, a copy from the other X chromosome balances it. Men are not lucky in this sense – they have only one copy of the gene.”

Another study involving 100 prisoners in the United States (published in the scientific journal “Psychiatric Genetics”) demonstrated that the MAOA gene is associated with higher crime rates if its host experienced physical and psychological abuse as a child.

“The relationship between genes and the environment in which we grew up is very important for understanding the differences in crime among people with high levels of criminal activity,” says Todd Armstrong, a scientist from Sam Houston University (USA).

Tiihonen agrees that environmental conditions, in particular, violence experienced in childhood, should be taken into account. “In addition, our ability to understand the nature and consequences of our actions and control our behavior is of great importance.” According to him, about 20% of the world’s population are carriers of at least one of two variants of the genes of aggression. Of course, not all of these people are killers. Genes that we carry in ourselves can provoke aggression, but they are far from the only reason that pushes a person to a crime.

Readers share interesting observations in the comments to the study.

“I am a psychiatrist, I had to work with violent aggressive patients. According to my observations, there are people who are naturally inclined to take care, create something new, and there are people who were born “destroyers” – they either cannot resist the impulse to kill, or they are pleased to kill, they want more and more. It’s not easy to accept this fact for civilized people who see violence only in the news and in the movies. Unfortunately, whatever the cause — genes or a difficult childhood environment — it is impossible to change such killers. Rehabilitation is a dangerous illusion. There will always be a need to protect us from them, to keep it as far as possible.”

“Once upon a time, the ability to kill an enemy was an advantage in terms of survival – people lived on the principle of “I kill them or they kill me.” Today, we need to unite and help each other – otherwise, the planet will not survive. Unfortunately, man had too little time on Earth to create a truly civilized society. This process is still underway. We inherited the genes of primitive times, but over time they will be replaced by the genes of friendliness – we will learn to be less “warriors” and more “members of the same team”. We have lived thousands of years without civilization and only recently came to what we call normal life – when the laws work and all members of society have equal rights.”

“To be on the side of good or evil – the choice depends only on us (we are not talking about mentally ill people). You can’t use genes to judge innocent people who have no intention of committing a crime. Our scientists still cannot figure out whether it is useful or harmful to drink milk – and now they want to predict whether a man is good or bad? It’s funny.”

Of course, genetic predisposition cannot be excluded from the complex of causes causing crime: it may even be decisive. But every individual must have a sober mind. If he has it, then the criminal environment will never become a native element. If a sober mind is absent, then the person will float at the will of those genes that dominate him, and only God knows where it goes.